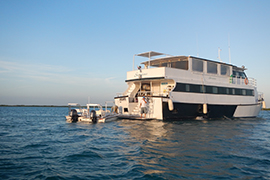 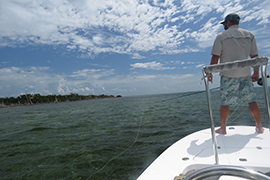 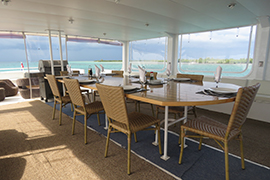 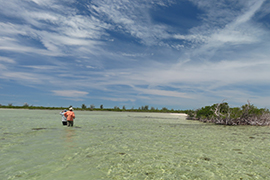 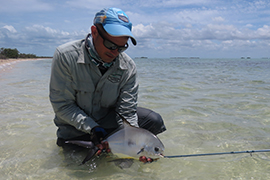 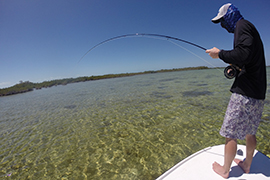 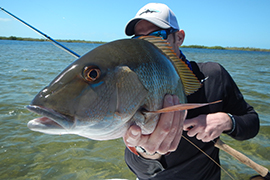 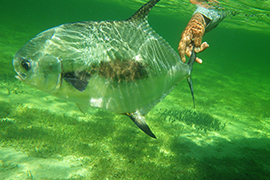 LOCATION
At just under half a million hectares, the Zapata Peninsula is by far the largest swampland in the Caribbean. It’s located in the Matanzas District of Cuba, and takes up almost a third of the district. For angling purposes, the park is divided into two separate entities. This is the San Lazaro section of the Zapata National Park, which is located southwest of the Salinas section of the park.

SEASON OF OPERATION
Year round

The entire Georgiana must be booked out in order to secure the booking, unless Slipstream is offering hosted week slots

ARRIVAL AND DEPARTURE LOGISTICS
The regular week runs from Saturday to Saturday during peak months but during the low season it is sometimes possible to be a little more flexible in terms of arrival and departure days.

ACCOMMODATIONS
The Georgiana Live Aboard is fully constructed and designed for outdoor purposes and is able to take you to the most remote and pristine flats within the San Lazaro section of the Cienega de Zapata National Park. She is 100 feet long, with 6 comfortable cabins, each with A/C, private bath with shower and lots of hot water. The yacht can accommodate groups of 8 anglers in exclusivity. One of our favorite aspects of the Georgiana is the fantastic amount of space on board. Unlike many live aboards where space is at a premium, the Georgiana has plenty of storage throughout the yacht. All rooms are located on the first level of the yacht. The dining area, bar and fantail lounge are all upstairs on the second floor. This is where all the socializing on board takes place.

THE FISHING
Even though the Las Salinas and San Lazaro areas of the park are right beside each other, there are some big differences between the two areas that are important to understand. The main one is that the water is a generally deeper than that found next door in Salinas. On average, about a 1-2 feet deeper. There is also a lot more open water between the hundreds if not thousands of islands that dot the area. With engines being utilized in this section of the park, it allows anglers to fish an enormous area that would be impossible to access with the non-motorized skiffs used at Salinas.

From what we have seen while fishing the area and in speaking to several of the guides who have been exploring this new section of the park, this location should be viewed as a bonefish destination. And what a fine bonefish destination it is. Yes, there are other species available, including permit, mutton and cubera snapper, jacks and some tarpon. But, these species should be looked upon as a bonus if encountered and not to be expected.

The San Lazaro bonefishing is truly superb and there are not many places where it is consistently better. Depending on the location you are fishing that day, the water will range for 1-3 feet deep. The water is crystal clear at San Lazaro, which means that it’s not difficult to see cruising fish from a long way off.

Mangrove islands, estuaries, shallow bays, and sand bars are the common structure in this part of the park. Further out towards the open water, islands covered with Australian Pine offer some good protection when fishing these more out-laying areas. The wading at San Lazaro is excellent and it’s generally either hard packed sand or a coral based flat rock that also offers excellent footing. On my last trip to fish San Lazaro, on my last day, I got out of the skiff at 8:30 in the morning and did not get back in the boat until 3 pm. While not everyone wants to wade for 6+ hours, it’s nice to know that you can if you want to.

The average size of the bonefish is 2-4 pounds, with considerably bigger fish seen and cast to daily. The largest bonefish landed in San Lazaro, since it opened in the Spring of 2013 is 12 pounds.

With this part of the park being protected until only recently, the mutton snapper fishery here is nothing short of incredible. For those who enjoy landing this hard fighting fish on the fly, there is no better place that I have ever seen.

The river – is about an hour drive from the hotel but still located inside the National Park. The river is a superior juvenile tarpon fishery with the average tarpon weighing between 5-25 pounds. Sixty to 80 pound tarpon are not uncommon and there is a healthy snook population living in the river as well. Guests will fish the mangroves as well as the wider bays and tributaries for rolling fish.

The casting platform at the front of the boat is of a decent size and while fishing from these skiffs takes a little while to get used to, the boats are ideal for the environment that they fish in. Drawing virtually nothing, the skiffs can access unbelievably skinny water. There are also two traditional flats skiffs utilized at San Lazaro, which carry two anglers and a guide. These flats skiffs are powered by 75 horse power two stroke Yamaha engines. The boats on the river are John Boats with 25 horse powered engines. No rental gear available from this location.
Revise the following

The casting platform at the front of the boat is of a decent size and while fishing from these skiffs takes a little while to get used to, the boats are ideal for the environment that they fish in. Drawing virtually nothing, the skiffs can access unbelievably skinny water. There are also two traditional flats skiffs utilized at San Lazaro, which carry two anglers and a guide. These flats skiffs are powered by 75 horse power two stroke Yamaha engines.

The boats on the river are John Boats with 25 horse powered engines.

No rental gear available from this location.

GETTING THERE
Guests will fly into Havana where you will be met by a Slipstream Angling representative as soon as you clear customs. You will then be driven directly from the airport to the Zapata National Park in one of our modern air conditioned vans or buses, depending on group size. The trip takes 2.5 hours and we will usually stop once for refreshments. The San Lazaro launch site where the boats are kept is about a 20 minute drive inside the National Park.

Upon arrival at the boat launch site, guests will get into their skiff for a 30 minute ride down a narrow mangrove canal to the open water, where the guides will then head out to their chosen fishing location for the day. The drive down the canal is unlike anything we have experienced before when driving in a boat and it is both beautiful and exhilarating. During the drive down the canals, guests will pass through a serious of cleverly designed series of 3 dams that the guides raise and drop, which helps maintain the water flow inside the canals. It is unlike anything we have ever seen and adds to the richness of the overall experience of fishing this unique location.


Slipstream Angling is a full service travel company and can handle international airfare, Cuban Visa applications, as well as a host of other services relating to your trip. Please contact us directly at 1 866 644-7703 for assistance.